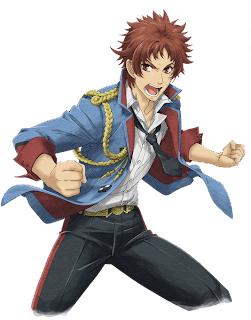 For Yaoi-Con this year, I will cosplay as Avan Hardins from Valkyria Chronicles II.

I've looked online and I can't find a costume for him.  So even though I've never done this before (that is, I've never cosplayed before) and there's less than two months until the Con...

I am totally gonna create his costume myself!

I will update this post with pics as I go along... 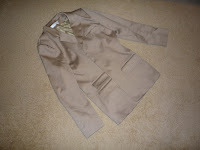 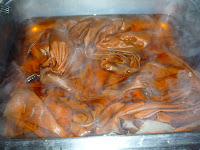 {2} Removed beige dye in hot water with a color remover, which revealed a tan base. 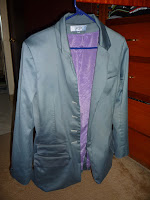 This was the result.  It's not quite as blue as I would've liked, but it'll work.

I also dyed a 100% cotton blazer before this, which turned out exactly the color of Avan's -- but unfortunately the fit of that blazer was not great.  When I dyed this cotton/poly blend the same color it turned out a terrible light grey.  Hence I dyed it a darker blue, which turned out as you see here.

I tried using a "disperse dye" for the polyester-ness, but instead of boiling the garment in the dye for an hour since I don't have a big enough pot, I thought I might be able to get away with running it through the hot cycle in the washer.  Alas, the dye was only taken by the inner lining, which turned out purple!  >_<

Moral of the story:  only dye 100% cotton if you can.  You'll have a lot more control over the color.  Dying blended fabric is a crapshoot. 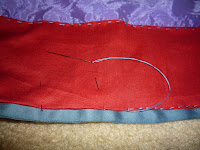 {4}  Sewed on red cotton fabric to the lining and cuffs.  Slightly tedious, since I'm not exactly a master seamster. 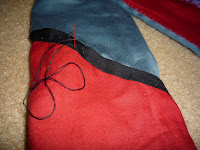 {6} Used a white acrylic paint marker on big, black square buttons to make them checkered.  Sewed these on. {7} Sewed on a Lanseal Military Academy patch.  The patch was created at a custom t-shirt place (a screenprint onto cotton).  I'd considered getting an embroidery, but that was a bit outside my budget. 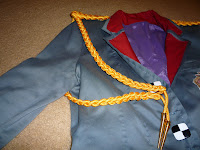 {8} Attached a shoulder cord and knots.  If ever you need such things, I'd suggest this company.  They asked a lot of questions to make sure I got what I wanted; they even took pics to give me a preview before purchase.  The product was $30, which included shipping from Philadelphia to Seattle -- making it the least expensive on the market that I found (considering it's customized). 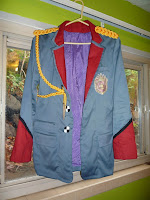 Okay, blazer is done.  Could use an iron, though... 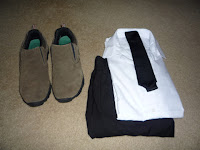 {9} White button-down, black dress pants, brown shoes, short tie.  I'm gonna forgo putting a red stripe down the pants since I didn't have a pair of nicely-fitting dress pants when I bought these; I want them around for other occasions. 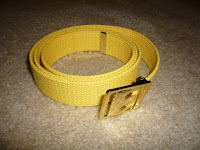 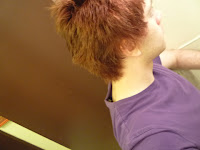 {11} Last step:  colored my hair copper.  Well, it's not technically the last step, but I'll leave the, uh, miscellaneous grooming to your imagination. 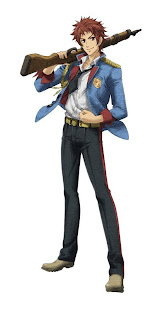 Email ThisBlogThis!Share to TwitterShare to FacebookShare to Pinterest
THEMES: yaoi