Lord of the White Hell by Ginn Hale

Michael and I were both excited when this book arrived.  We read it aloud to each other a chapter at a time.  We had high expectations because we've read a couple other titles from Blind Eye Books (Hale's debut Wicked Gentleman and Astrid Amara's The Archer's Heart) that we both liked...

First off, I want to say that we really support the vision of Blind Eye Books, a small press based out of Bellingham, WA, that publishes fantasy/sci-fi with gay and lesbian protagonists.  Currently, they have 5 novels (including Lord of the White Hell divided into two books) and 2 anthologies.  6 of 7 of their titles feature male protagonists and the ones we've read have a strong romantic subplot, which I take to mean that they are capitalizing on the market of M/M romance popular among females (inc. some lesbians) that also includes some gay male readers.  I remember seeing Blind Eye at Yaoi-con last year, though I hadn't read any of their titles yet at that point.

Lord of the White Hell follows Kiram Kir-Zaki, a 17-year-old Haldiim who is really good with machines (insofar as machines exist in a medieval type of world).  His parents have enrolled him in an all-male academy where everyone is Cadeleonian.  Kiram is dark-skinned and curly light-haired whereas Cadeleonians are light-skinned and dark-haired; in other words, there's some racial politics to the story.

Kiram's culture is matriarchal, takes a neutral position on same-sex relationships and has an historic faith that resembles animism.  Conversely, the Cadeleonians are monotheistic, patriarchal, structured and strict.  In the course of the first book, we actually don't see how the Cadeleonians would respond to a same-sex relationship, but it's made explicit that the answer is not good.

On his first day at the academy, Kiram meets Javier Tornesal. A few years older than Kiram, Javier is a cocky Cadeleonian duke that is plagued with a curse that the Cadeleonians call the "white hell."  Whereas Kiram is treated badly for being Haldiim, a lot of students are afraid of Javier because of the curse, which gives Javier power to heal quickly, shoot violent sparks from his hands and a few other powers.  He is regularly subdued with poison under the auspices of penance and a fear that the curse will consume him otherwise (although there is question in Kiram's mind whether this is the true reason).

Kiram and Javier share a room as outcasts in a tower of the academy.  The two are attracted to one another and share sporadic bouts of passion that only makes their relationship more complicated.  Basically, the story is about their budding relationship, Kiram's adjustment to the academy, with a background mystery concerning the curse.

Overall the worldbuilding is good, but what bogged the story down, and why I ultimately give it a lower-ish rating, were three weaknesses that blend together:  (1) the pace, (2) an overuse of nonessential dialogue and (3) repetition.  In terms of pace, the story is divided into two books when we think it should only be one.  A number of scenes felt like filler, and sometimes within an entire chapter, the plot crawled forward.  This changes for the better in scenes with Kiram's uncle and his husband, but the story from Kiram's perspective felt too limited (or something).  More and more I wanted to know about what was happening beyond Kiram rather than listen to his friend Nestor talk about his drawings for the third or fourth time.

Hale overuses the word "bow":  people are bowing left and right, both their heads and their waists.  People are also giving people kinds of looks frequently, so much that we stopped caring what kind of smile Javier was giving Kiram.  This is just a matter of having different ways to describe characters (filling beats between lines of dialogue), which we felt Hale did a much better job of in Wicked Gentlemen.  Oh, and the typos...probably around 30 of them.  Too many!

I preordered both books and have begun reading the second one.  Michael and I have decided not to read it aloud, but the concluding half still has a lot of potential. 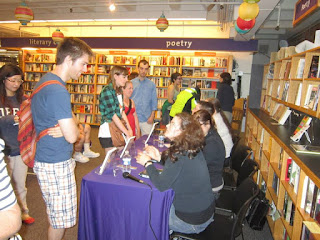