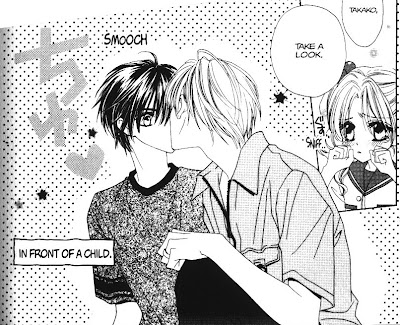 Today I lectured undergrads about yaoi.  My friend's course is a comparative literature course on Japanese manga, and this week was "boys' love" week.  I had read all the students' response papers to a 2002 BL manga titled Only the Ring Finger Knows; it was fascinating to read all the different perspectives from students with different views about homosexuality.  I framed my words around theirs.


Most of the students were okay with the "unusual" gender roles throughout the text.  Many of them had astutely observed in their papers how the homo relationship of the text disrupts (or in some ways also reifies) rigid gender roles of many real-life hetero relationships (given that this was one of the main reasons yaoi came about:  Japanese women's frustrations with rigid gender roles of their society).  I explained to them that even if a particular yaoi story reifies roles by merely changing the gender of one of the characters, the fact is that yaoi producers/consumers imagine both roles upon male characters, which is a definite disruption.

Near the end of the story there's a scene where the two main characters kiss in front of a young child, a niece (shown above).  This made some of the students wonder about the political limits.  So, I pulled up a YouTube video of that guy from Iowa with lesbian parents who I'm sure saw his parents kiss in front of him as he was growing up.  I talked about how in the manga the characters move from running away from their feelings (because of homophobia) toward becoming publicly affectionate.  I talked about the public/private divide and how there has been a movement from all affection being private, to hetero affection being public, to nowadays a very uneven ground in which gay affection is often said to need to remain private for the "sake of children" -- and how this is a double standard.

The discussion was somewhat lopsided, as I discovered it's difficult to get undergrads to talk -- although they were actively listening (other than the usual one nodding off).  When they did talk, I wanted to hear a lot more from them!  (I need to learn me some pedagogical skillz...)  Anyhow, the experience definitely made me nostalgic for school, not just for my own sake, but because of the very important sharing that goes on in the classroom space.

(pic from Only the Ring Finger Knows by Hotaru Odagiri [Digital Manga, Inc])

Email ThisBlogThis!Share to TwitterShare to FacebookShare to Pinterest
THEMES: yaoi